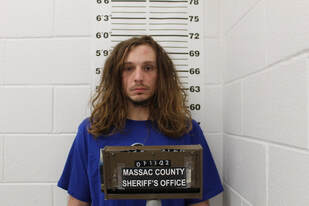 Officers saw Matthew R. Cullwell in the parking lot of the Massac Village Apartments, but once Cullwell saw them, he ran into an apartment.

The resident, Mary N. Evans denied Cullwell was inside, and refused to cooperate. Meanwhile Cullwell tried to flee through a second story window, but went back inside when he was spotted.

While deputies helped Metropolis Police set up a perimeter, loud noises were heard coming from inside the apartment.

Cullwell was then observed looking out a window in an adjacent apartment. Officers determined that Cullwell had broken through a closet wall to enter the second apartment. Two children were in the room at the time, but were not harmed.

Cullwell then broke through another wall to a third apartment. A search found Cullwell hiding in a couch.