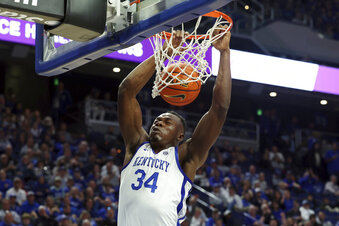 Toppin scored a career-high 20 points and had 10 rebounds to help No. 15 Kentucky rout North Florida 96-56 on Wednesday.

“As the season goes along, I'm getting more confident,” he said. “That's because of my teammates. I'm not worried about scoring right now, I'm more worried about defense and rebounding and the offense will come. I knew (my offense) would come."

The Wildcats (4-2) easily recovered from the loss at Gonzaga to win their 23rd consecutive home game against an unranked opponent.

“After a loss a loss, we always want to bounce back,” Toppin said. “I think we did a good job of that."

“I'm not happy that we lost two games,” Calipari said. “I want to win every game I coach. We gave one away (Michigan State) and the other I knew would be hard for us to win (at Gonzaga). .. When it started the way it started and we couldn't make a shot, it got ugly."

Ten players scored for the Wildcats, with three starters reaching double figures. Oscar Tshiebwe had a second double-double of the season with 16 points and 15 rebounds. Antonio Reeves finished with 20 points. Toppin did most of his scoring in the second half with 12 points.

In his first start of the season, Reeves, an Illinois State transfer, scored 18 points in the first half and made four of Kentucky’s seven 3-pointers, including two in consecutive fashion. Reeves hit a 3-pointer at the buzzer to close an impressive performance in the first half.

““It felt great,” Reeves said. “(I was) feeling comfortable. The team got me involved in the game. The rim got bigger for me. I just kept shooting the ball.”

Kentucky: After dropping 11 spots in the Top 25 following two losses in six days last week, the Wildcats began a climb back toward the Top 10. The Wildcats have will play four of their next seven games at home. Kentucky continues to play unselfishly and finished with 23 assists and were averaging 19 per game entering the contest. Kentucky had nine blocks, led by freshman Ugonna Onyenso with four to go along with 10 rebounds, both career highs.

North Florida: The Ospreys have played only one home game through their first six games. North Florida’s lone win was a 72-66 triumph over South Carolina State at home on Nov. 19. Following road games at High Point (Dec. 3) and Houston (Dec. 6) to open December, North Florida will close out the calandar year with four home games.

North Florida senior Carter Hendricksen made a return to Lexington and finished with seven points. Hendricksen led Lexington Christian to two district titles and a Class A state title in 2018 during a stellar prep career. Hendricksen entered the contest as the team's second-leading scorer, averaging 14.5 points per game.