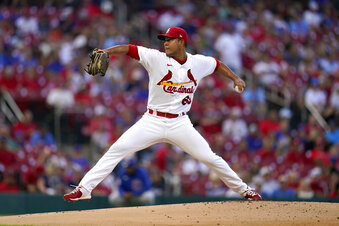 The Cardinals won the opener 4-3 as Lars Nootbaar hit a tying sacrifice fly in the seventh inning and a game-ending RBI single in the ninth.

Quintana, traded from the Pittsburgh Pirates to St. Louis on Monday, surrendered one run, one hit and two walks and struck out seven batters in six innings in a no-decision debut with the Cardinals, who have won four straight and are tied for first place in the NL Central with Milwaukee.

Jordan Hicks (3-5) allowed a run on a hit and two walks, and Génesis Cabrera and Chris Stratton each tossed a scoreless inning in relief in the combined two-hitter.