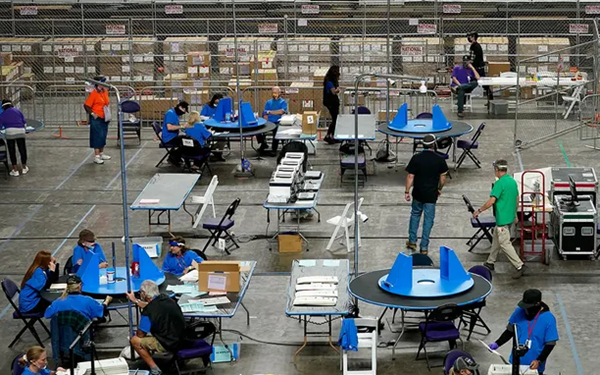 Advertisement
By The Associated Press
Nov. 22, 2022 | PHOENIX
By The Associated Press Nov. 22, 2022 | 10:09 AM | PHOENIX
The board overseeing a southeastern Arizona county whose Republican leaders had hoped to recount all Election Day ballots on Friday delayed certifying the results of last week's vote after hearing from three men who alleged that counting machines were not certified.

The Cochise County board of supervisors say that the claims are valid enough for them to delay the certification until a Nov. 28 deadline.

They claimed the U.S. Elections Assistance Commission allowed certifications for testing companies to lapse, and that voided the certifications of vote tabulation equipment used across the state.

That came despite testimony from the state's elections director that the machines and the testing company were indeed certified.

"The equipment used in Cochise County is properly certified under both federal and state laws and requirements," state Elections Director Kori Lorick told the board. "The claims that the SLI testing labs were not properly accredited are false."

GOP board members Tom Crosby and Peggy Judd voted to have all the ballots in last week's election counted by hand to determine if the machine counts were accurate.

Crosby also defended a lawsuit he and Judd filed against the county elections director earlier this week seeking to force the hand-count. They dropped the case against Lisa Marra on Wednesday.

"If our presenters' request is met by the proof that our machines are indeed legally and lawfully accredited, then indeed we should accept the results," Crosby said. "However, if the machines have not been lawfully certificated, then the converse is also true. We cannot verify this election now."