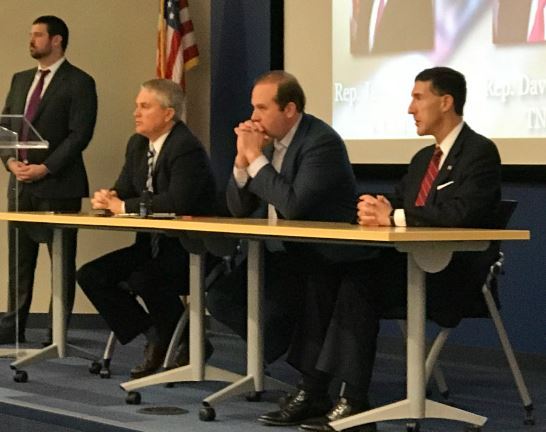 Advertisement
By West Kentucky Star Staff
Mar. 26, 2018 | PADUCAH, KY
By West Kentucky Star Staff Mar. 26, 2018 | 04:01 PM | PADUCAH, KY
Three congressmen were in Paducah Monday to discuss the infrastructure on the Ohio and Mississippi Rivers, and heard from maritime industry officials who asked why bills have not been passed to help them with one party controlling all three branches of government.

The congressmen did not respond to the comment directly, but Rep David Kustoff did respond in relation to timing. He said he felt that the time for a big infrastructure bill to pass is narrowing.

"I think we all realize that there's a window for these projects do get done if they are to get done this year." Kustoff said, adding that he was not speaking on behalf of anyone other than himself. Kustoff said Speaker of the House Paul Ryan indicated that infrastructure reform would likely come in small bills.

"I think if it can be done that's probably more likely," he said.

Congressman James Comer of Kentucky agreed, saying that the average person on the street might think the plan is simple. Then they often wonder why more big bills are not passed when one party has control of the house, senate and presidency.

Comer explained, "In the Senate, it takes 60 votes to pass anything." Comer said with 51 republicans and 49 democrats in the house it can be difficult not to get what he called a "party line vote."

Another concern the river industry workers mentioned was that current administration does not understand the business, but the congressmen said that simply isn't true.

Smith said James has lived on the rivers for 30 years, and President Trump knew he needed someone in the administration that knew the water. Smith said the position is the highest a president can appoint in the Army Corps of Engineers.

No specific smaller bills were mentioned in the forum. The congressman just listened as concerns were voiced.