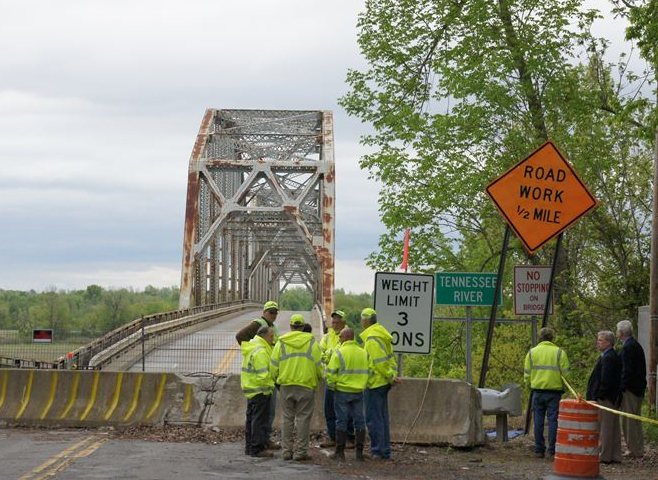 UPDATE: McCracken County Sheriff Jon Hayden confirmed to West Kentucky Star that boat and barge traffic on the Tennessee River was stopped for several hours, after the Paducah approach to the old Ledbetter Bridge dropped by about two feet within a 24-hour period.  The Coast Guard says it has reopened the Tennessee River near Paducah to river traffic after engineers determined the bridge dropping 2 feet overnight wouldn't threaten river spans.

But Lt. Dan McQuate says no stops are being allowed in the area near the old Ledbetter Bridge between Paducah and Livingston County.

Sheriff Hayden said Kentucky Transportation Cabinet engineers have been inspecting the bridge since Wednesday morning, the Army Corps of Engineers had been notified, and geological experts from University of Kentucky have been called.

He also said that further inspection of the river bank on both sides of the bridge approach in McCracken County indicate what appears to be "ground slippage" toward the river. Deputies have been going door-to-door to alert homeowners on Camelback Road and Tennevue Estates, telling them to call the Sheriff's Department if they see any changes in the landscape of their property.

Harold Gibson, an Engineer with the Kentucky Transportation Cabinet, told West Kentucky Star's Tim Brockwell the bank leading up to the bridge has shifted around 4 feet, a bridge pier under the bridge has shifted around 6 to 8 feet, and the bridge deck has fallen around 2 or more feet on the McCracken County side of the bridge.  Gibson says in his opinion the bridge is in danger of "immediate collapse" on the McCracken County side.  The bridge is visibly listing to one side, according to our reporter on the scene, Tim Brockwell.

What started as a drop in two approach spans at the west end of the Old Ledbetter Bridge over the Tennessee River has turned into a multi-agency response to land slippage along a bluff on the McCracken County side of the river.

Inspectors went to the bridge this morning expecting to find that rockers at the top of the approach span piers had collapsed.  Concern about the rockers prompted a 3 ton load limit being placed on the bridge for more than a year before it closed to vehicle traffic in July 2013.  An inspection of the incident found land along the bluff at the base of the approach piers had moved downhill several feet causing  the two approach spans to drop about 3 to 4 ft. where they join.

Through the day the investigation has expanded.   At this time, McCracken County Emergency Management is taking the lead in monitoring the land slippage.

According to McCracken County Emergency Management Director Jerome Mansfield, no evacuation of homes along the bluff has been ordered.  However, this afternoon McCracken County Sheriff’s Deputies went door to door in the area to make nearby residents aware of the land slip.

“Residents along the bluff should be diligent and report any unusual sounds, land movement, or cracks in the soil and report those immediately so prompt action can be taken,” Mansfield said.  “Anyone who sees anything unusual should report it to the local 911 call center immediately.”

While vehicular traffic was moved off the Old Ledbetter Bridge last July when the New Ledbetter Bridge opened to traffic, the threat to the stability of the old structure became of concern to river traffic.  As a precaution, the US Coast Guard temporarily closed the Tennessee River to boat traffic.  That halt in barge traffic is being lifted by the Coast Guard with an advisory that boats should avoid stopping between Tennessee River mile point 5.1 and 5.5.  Mariners should review the official Coast Guard Advisory.

At this time, KY Transportation Cabinet geotechnical specialists and engineers are looking at the land slippage.  KYTC officials are also looking at ways to expedite demolition of the old bridge.

Among others, Mansfield has requested the US Army Corps of Engineers and the Kentucky Geological Survey to send personnel to the site to assess conditions along the bluff.

He also noted that with the recent landslide in Washington State, and the sinkhole that developed under the National Corvette Museum in Bowling Green, KY, officials want to get a good grasp of the situation.

The McCracken County Emergency Management Agency has set up a command post and will have personnel monitoring the area through the night and for the next few days.

It's a mystery at the moment.  The Ledbetter bridge, that has been closed to traffic for less than a year, has suddenly fallen two feet overnight on the McCracken County side of the bridge.

Officials with the Kentucky Transportation Cabinet are warning the public to stay away from the bridge completely as engineers assess what's going on.  River traffic along the Tennessee River is unaffected at the moment.

The bridge was closed to traffic in July, 2013 when the new bridge a short distance away was opened to traffic.  Keith Todd, with KYTC, says:

The Old Ledbetter Bridge has been closed since the end of July 2013 when US 60 traffic between Livingston County and McCracken County was moved to the new bridge just upstream.

The Transportation Cabinet has been seeking bids for demolition of the old bridge. The bridge came in above engineer estimates and is being evaluated at this time.

The public is advised to stay off the Old Ledbetter Bridge and to avoid going under the approaches on the McCracken County end of the bridge where the drop occurred.

Also known as the George Rogers Clark Memorial Bridge and The Ledbetter Bridge, the OLD US 60 Tennessee River Bridge opened to traffic in 1931. In January 2012 the old bridge was restricted to a 3 ton load limit. Construction of the New Ledbetter Bridge was expedited to restore normal traffic flow.

KYTC engineers are continuing to evaluate the old bridge to determine the cause of the drop on the approach and the extent of the damage.