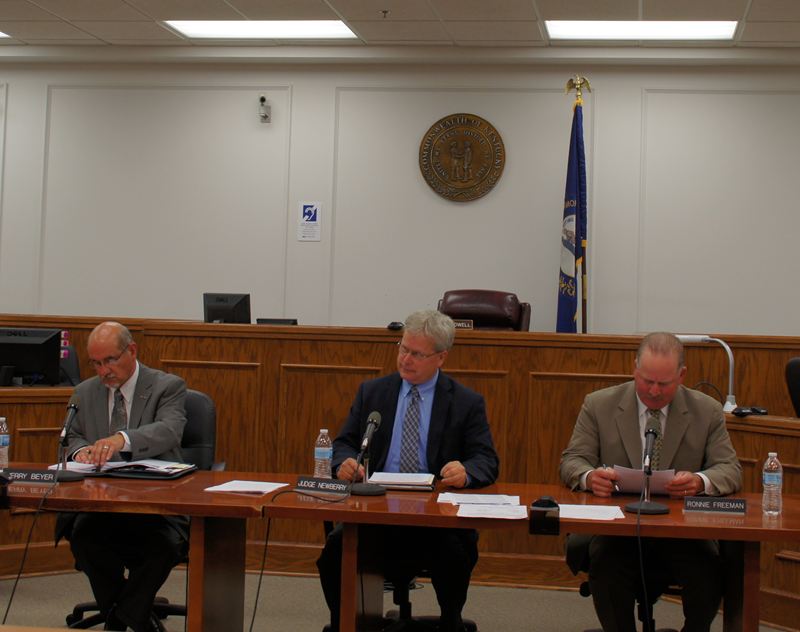 At the prompting of a county resident, Judge-Executive Van Newberry and Deputy Judge Doug Harnice shared a progress update on resolving issues surrounding the Animal Shelter, which was set up temporarily almost three years ago.

Several months ago, a task force set up to study the issue recommended re-establishing a relationship with the McCracken County Humane Society, which had been used to house animals until an alleged illegal euthanization controversy in 2011. Harnice said he spoke to Dr. James Shumaker last week, and the Humane Society is waiting for plans and cost estimates for their new building from an architect, and has discussed details of the relationship.

"They're just waiting to see what the building will cost when the architect returns, and then he also told me that their board mainly has accepted everything that we talked about in committee," Harned said. He said a timeline for construction is dependent on the architect, too. Harnice said that so far, the preliminary agreement would give the county control of the old Humane Society building when the new building is finished, includes access to Humane Society records, a city and county member on the Humane Society board, agreement on euthanasia policies, and a fee paid to the Humane Society for their services. That figure can't be set until the new building cost is determined, Harnice said. Regarding euthanasia,

Newberry said the county has received a letter from People for the Ethical Treatment for Animals asking them to euthanize more animals - something he found shocking. The letter said keeping animals long-term in an overcrowded shelter was more cruel than euthanizing them, but Newberry said the county shelter currently takes any animal and tries its best to keep them until they are adopted. With that in mind, he said spaying and neutering programs are a necessity. Newberry said, "We'd like to have every animal spayed and neutered - once it comes in and as it's adopted - that's the ultimate goal. I actually think the Humane Society probably has that same goal, almost all shelters do. It's just a matter of funding to do that."

J. W. Cleary spoke on behalf of the Carson Park Horsemen Committee, which was in attendance, and asked that the Fiscal Court add members of the Horsemen Committee to the current seven-member Carson Park Board of Directors, so those who work in that sport are able to keep the park "horse-friendly" as plans are made to improve it.

"We're talking about race horses, show horses, activity horses, mental health (therapy) horses. So, what we're here to ask for - if possible - if we can get some horse people on that board," Cleary said. Cleary and long-time horseman Jim Fox, who has been involved with the park since the late 1960's, said there are now fewer horses in the park than ever before, and they don't want that trend to continue. Cleary said very few current board members, if any, are in the equestrian field, so it's easy to turn attention to other things, or ignore the requests of horsemen.

The group submitted seven names and asked for them to be appointed to the Carson Park Board, so there would be equal representation. The court agreed to discuss it at their next meeting on September 22.

A representative from Kalleo updated the court on plans to keep county communication systems backed up, an item discussed at an earlier budget workshop. This includes the emergency operations center, jail, and dispatch systems for the Sheriff's Department, which are interconnected through fiber-optic systems from Paducah Power.

A recent problem caused a six-hour outage on these systems.

To prevent a future failure, Kalleo suggests a backup system using Verizon, which would initially cost $4,100 plus a monthly fee of $120. Kalleo also proposed replacement of in-car computers for the Sheriff's Department. At the budget workshop, it was suggested that tablet computers replace the laptops currently in use, because they are cheaper. During tests of two different units, officers indicated the fonts and displays were too small, so instead, Kalleo recommends 10 ToughBook computers be purchased this year, and each of the following two years, at a cost of $2,989 each. Both recommendations were allowed to move forward by consent.

The court discussed a possible restriction at Carson Park, as a stipulation of the Land and Water Conservation Fund Act, which re-distributes offshore oil drilling fees to ensure wilderness places and parks are maintained. The deed restriction would cover between 5-10 percent of the park, according to County Attorney Mike Murphy.

The part of the park included in the restriction is the extreme western end of the track, and an easement for the entrance/exit gate on that end of the park. The restriction would also require that the park is available for anyone regardless of race, gender, or disability, that it's safe for everyone and open during reasonable hours, isn't used to store hazardous chemicals and is designed for public recreation, and that the state would be asked for approval when improvements are proposed for that area. The next step in the process is the the state's approval of the map designating the part of the park under the restriction, and the court would approve a memorandum of understanding to allow the restriction. The court will deal with the issue at a later meeting, when state approval is given for the map.

The court heard from Lisa Emmons of Denton and Keuler law firm, on behalf of Genova Products, Inc. In order to get a loan approved to purchase equipment for their manufacturing facility in a building owned by the city and county on Commerce Drive, a waiver and consent agreement is needed, stipulating what is owned by Genova and what is owned by the city and county. A motion passed to approve a memorandum of understanding between the city, county, and Genova Products, so their lender, Wells Fargo Bank, can renew their line of credit.

The court passed motions to re-appoint Sandra Wilson and Kelly Nuckols to new terms on the Paducah-McCracken County Industrial Development Board, because their terms have expired. Their new terms will expire in September 2018.

The court was updated on mowing along county roads. Crews are currently making their third pass through the county, and are in West Paducah. Four employees from the Road Department will be helping at the waste tire collection event, September 11-13 at the Department's garage on Lane Road. Tires with or without rims will be accepted, but foam-filled tires, off-road construction tires, earth moving equipment tires, and solid tires pressed onto rims will not be accepted. Tire retailers, agricultural tire retailers, and salvage yards are not eligible to participate. Fall paving is also set to begin on several county roads, including Rudd Street, Colony Drive, Fair Chase Drive, Hunting Hills subdivision, and more.