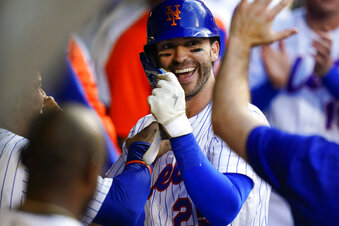 Pete Alonso and Daniel Vogelbach hit back-to-back homers in the third for the Mets, who extended their lead over the Braves to 4 1/2 games. Alonso, who began the scoring with a single in the first, finished with three RBIs.

Naquin, acquired from the Cincinnati Reds last Friday, hit solo shots in the second and sixth off Kyle Wright.