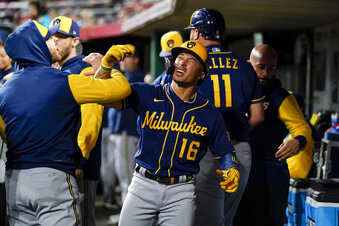 Wong hit a two-run drive in the second inning against Hunter Greene. He hit another two-run shot in the sixth off Dauri Moreta and a solo drive in the eighth against Joel Kuhnel. Wong has 15 homers and 46 RBIs on the season.

Milwaukee finished with just four hits, but each of Wong’s first two homers occurred after leadoff walks. The second-place Brewers opened a four-game set against lowly Cincinnati with their second straight win.

(Milwaukee Brewers' Kolten Wong (16) celebrates with teammates in the dugout after his two-run home run during the sixth inning of the team's baseball game against the Cincinnati Reds on Thursday, Sept. 22, 2022, in Cincinnati. (AP Photo/Jeff Dean))
ADVERTISEMENT
Advertisement
Latest Sports
Sports