Bolton's 24 points lead No. 2 Gonzaga over No. 4 Kentucky 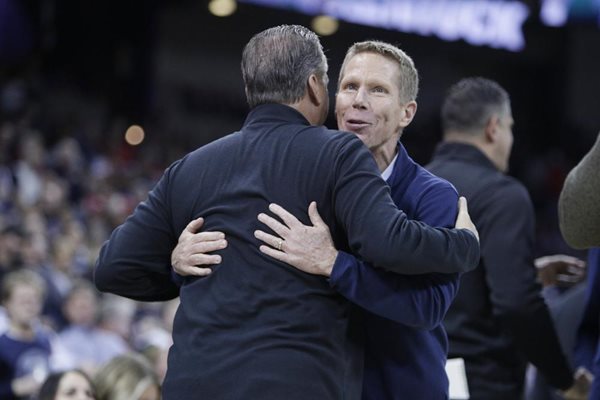 He needn't have worried.

Julian Strawther had 20 points and 14 rebounds for Gonzaga, which was coming off its biggest margin of defeat since 2014 in Wednesday's 93-74 loss to the Longhorns.

“You were hoping that's how your team responds after a disappointing loss,” Few said. “It was really, really big.”

Anton Watson had 10 points and 10 rebounds and spent the evening guarding reigning player of the year Oscar Tshiebwe, who was in foul trouble much of the game.

“Anton was phenomenal tonight,” Few said. “He was spectacular.”

Tshiebwe still finished with 20 points and 15 rebounds for Kentucky (3-2), which shot just 39% in the game compared to 56% for Gonzaga.

Gonzaga (3-1) dominated the first half. The Bulldogs led 25-15 with less than eight minutes left in the first, holding the Wildcats to 4-of-22 shooting. But Gonzaga committed eight turnovers to help keep Kentucky in the game.

Gonzaga went on a 14-3 run to expand its cushion to 41-25 by halftime. Tshiebwe had 14 points in the first half to lead all scorers.

“I was not stepping up like I should,” Tshiebwe said. “I’ve got to get better.”

Kentucky coach John Calipari pointed to his team's 25% shooting in the first half as a key.

“We can't miss every open shot,” Calipari said. “In the first half it was so embarrassing we couldn't run a play.”

Kentucky's Jacob Toppin said the team "got ourselves into a hole we couldn't get out of.” But the Wildcats found their shooting touch in the second half, going on a 14-6 run to cut Gonzaga's lead to 47-39. Kentucky's Cason Wallace and Antonio Reeves then hit consecutive 3-pointers.

But Tshiebwe promptly picked up his fourth foul and sat down with about 13 minutes left in the game. Timme went off for seven points and Gonzaga led 65-55 by the time Tshiebwe returned to the lineup.

Calipari refused to play this game at Gonzaga’s home venue, the intimate McCarthey Athletic Center. The Spokane Arena has twice the capacity at about 12,000 seats and was packed. Gonzaga is 12-6 all-time at the arena, last playing there in 2014.