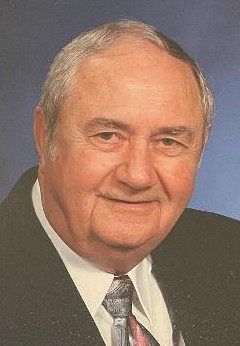 James was born on January 23, 1933, in Graves County, Kentucky. He graduated as the valedictorian of his 1951 Sedalia High School class. On June 20, 1953, he married the love of his life, Bobbie Joan Adams.

In September of 1953 he was drafted into the United States Army where he proudly served his country in the Korean War. After his honorable service tenure, he returned to Graves County. It is there he commenced his 41 ½ year career with the West Kentucky Rural Telephone.

In 1963, Mr. Harrison and four other men started the Kirksey Ball Park for the local families. He coached as well as served on the park board and was a Commissioned Kentucky Colonel due to his work at the park. He was also a past member of the Hardin/Marshall County Optimist Club. Mr. Harrison was a member of the Kirksey United Methodist Church.

James was preceded in death by his parents, Wade and Ona Mae Forester Harrison; sister, Bulah Meadows; as well as his grandson-in-law, Michael Myers.

A graveside service will be held at 2:00 p.m., on Sunday, November 28, 2021, at the Burnetts Chapel Cemetery. Rev. David Allbritten will officiate. No public visitation will be held.

The family would like to express their thanks to their friends and family for their support during James’ illness. A huge thank you to the Anna Mae Owen Residential Hospice House in Murray and to Andrew Porter, MD, (his lifelong physician).

Expressions of sympathy can be made to the Anna Mae Owen Residential Hospice House, 803 Poplar Street, Murray, Kentucky 42071 or the charity of your choice.