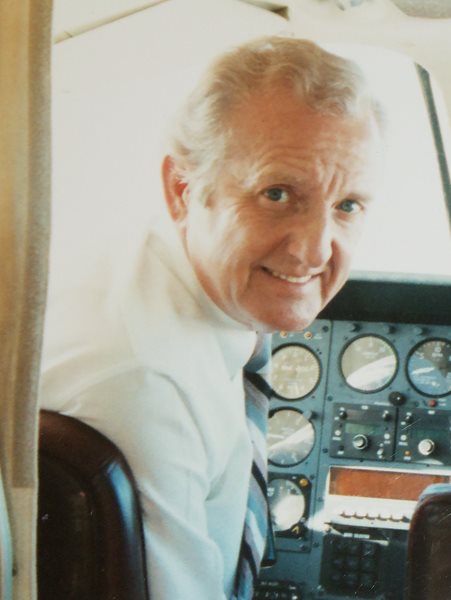 Bill was born on March 6, 1934, in Lola, Livingston County, Kentucky, to his parents, Mary Lucille (Harnice) Watson and Virgle Ray Watson. He graduated from Salem High School and attended Murray State University before being drafted into the U.S. Army. He was assigned to provide military security for NATO’s Supreme Headquarters Allied Powers Europe located in Versailles, France, before being honorably discharged. During this time, he met, courted, and married his wife of 63 years, Sidonie Juliette (Gauzargues) Watson, who was serving in the Signal Corps of the French Army.

Following completion of their military service, the couple settled in far western Kentucky in 1957. A daughter, Carolyn Sue, was born on April 8, 1960.

Bill initially worked as an insurance salesman before becoming Director of the Film Department for the local Paducah NBC affiliate, WPSD Local 6. He later obtained his commercial aircraft pilot’s license, with multi-engine, instrument, and flight instructor endorsements. The Paxton Media Group thereafter employed Bill as its corporate pilot. He retired in 1999.

Over his professional aviation career, Bill amassed over 6,460 hours of flight time with no FFA violations. A member of the Aircraft Owners and Pilots Association, the Mooney Aircraft and Pilots Association, and the FFA Wings Program, he received the Pilot Safety Award from the National Business Aircraft Association. In 2014, he was honored as a recipient of the Kentucky Ace Award, presented by the Kentucky Aviation Association and the Kentucky Department of Transportation and Aviation in recognition of his commitment to aviation education, safety, and development within the Commonwealth of Kentucky.

Bill sought to serve his community through involvement with several civic organizations.  He rose to the rank of Captain in the Paducah Composite Squadron with the Kentucky Wing of the Civil Air Patrol and was presented a Lifetime Membership in recognition of over 50 years of leadership and service to that organization’s youthful participants and community beneficiaries. He was also an active member of the Paducah Lions Club, which honored him as a Melvin Jones Fellow, the international association’s highest recognition. In addition, he was a past member of the former Paducah Optimist Club. Most significantly, Bill was a faithful member of Highland Baptist Church in Paducah, where his daughter serves as Director of Music. He was proud to have been named both a Duke of Paducah and a Kentucky Colonel.

Bill is survived by his daughter, Carolyn Sue Watson, M.D., and her husband, Kentucky Supreme Court Justice Shea Nickell (Paducah); his brother, Jerry Lee Watson and wife, Myra (Marion, Kentucky); a nephew and several nieces and cousins; plus cherished extended family members residing in France. He was preceded in death by his parents and a sister, Sandra Watson Sills and husband, Kenneth (Marion, Kentucky).

Friends may visit from 11:00 am until the funeral hour Saturday, June 11, 2022, in the chapel of Boyd Funeral Directors and Cremation Services in Salem, Kentucky. The Funeral Service will begin at 2:00 pm, with Dr. Richard Beck officiating. Burial will follow in Salem Cemetery.

Condolences may also be left online at boydfuneraldirectors.com.