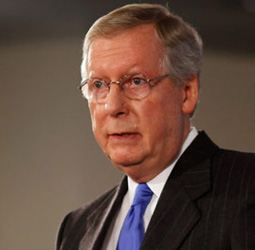 Despite some recent polls showing that Sen. Mitch McConnell might be vulnerable to a challenge in the primary or general election, only a handful of candidates have so far expressed interest in running against a five-term incumbent with millions of dollars in his campaign war chest.

The political action committee Progress Kentucky is launching a campaign designed to provide potential challengers with an early indication of how much support they might have among Kentuckians. The organization has launched over twenty petitions to “draft” possible challengers ranging from liberals like Ashley Judd to Tea Party conservatives like Phil Moffett, and all points in between.

Each petition asks signers to endorse the statement “We strongly urge ________________ to challenge Mitch McConnell for Kentucky's US Senate seat in 2014.”

The PAC has said they will launch new petitions to gauge support as candidates float trial balloons or as intriguing potential candidates surface in the media. Their initial batch of draft petitions include:

•Ashley Judd, the popular actress and University of Kentucky basketball fan who would run as a Democrat
•John Yarmuth, Democratic representative of the 3rd Congressional district in Louisville
•Phil Moffett, businessman and self-proclaimed Tea Party candidate who ran for Governor in 2011
•Thomas Massie, the Tea Party representative of Kentucky's 4th Congressional district in northern Kentucky.
•Larry Hausman, one of the founders of the Louisville Tea Party and a Congressional candidate in 2010.
•Dea Riley, an Independent who ran for Lieutenant Governor with the late Gatewood Galbraith in 2011.

A complete list of the petitions is available at ProgressKentucky.com .

Shawn Reilly, Executive Director of Progress Kentucky, said in a press release, “Mitch McConnell, the most unpopular Senator in the country must be challenged by someone that can bring about a brighter future for our state and someone who prioritizes good government and the needs of our state of their own ambitions. It’s unacceptable that someone as unpopular as McConnell would be unopposed for a sixth term.”