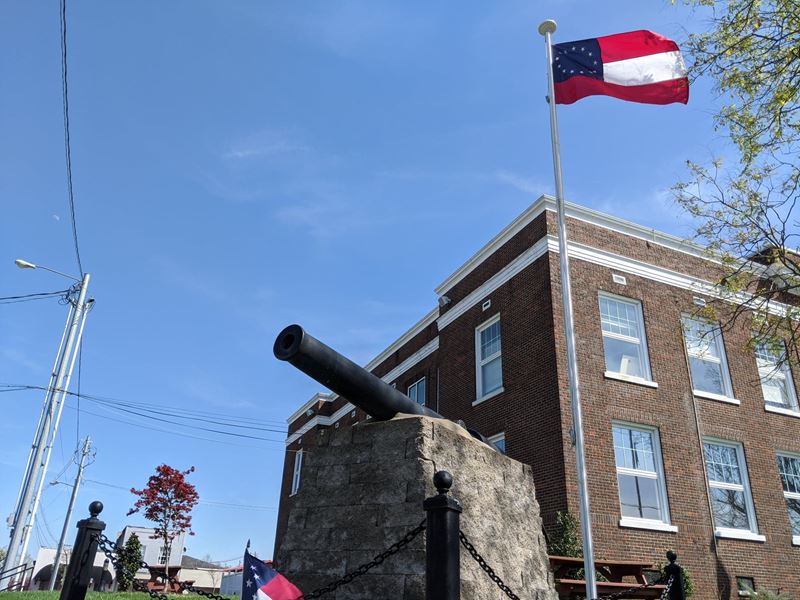 Marshall County residents may have noticed the newest addition to the courthouse lawn, positioned near the Civil War cannon.

Lamb, who is a member of the Sons of Confederate Veterans, said that from the end of the Civil War until the beginning of World War II, a Civil War cannon sat on the court square. Once the United States entered World War II, the government decided to donate the cannon as scrap for the war effort.

According to Lamb, in the 1950s and '60s people wanted a replica cannon to place back on the court square, and that finally came to pass in 2007.

Once the replica cannon was placed on the property, Lamb says the goal had always been to display a Confederate flag as well.

He said officials are currently in the works of acquiring a civil war period Union flag which will fly right above the Confederate flag.

"That way both sides are represented, because we had Union soldiers in Marshall County just as much as we did Confederates. We want both sides to be represented," Lamb said.

He said most Confederate troops were poor farmers that took up arms because the federal government was invading their homeland. "They took up arms to defend their homes. I think Confederate soldiers need to be honored just like any other American veteran."
When addressing criticism over the flag, Lamb said critics need to get their facts straight.

"Don't misrepresent history just to fulfill a political agenda, because it does nobody any service," he said. "I love history, I love western Kentucky, I love Marshall County, and you know, I just want both sides of history to be told. That was our only goal with erecting the cannon and putting the flag pole up."
Lamb feels that there has been a movement across the country of people attempting to erase history.