McCracken Jailer David Knight looks at accomplishments ahead of primary 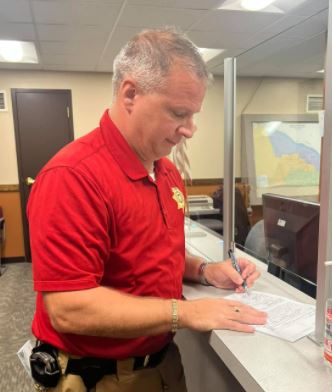 An attempted debate between Knight and his opponent Dan Sims became an interview with Knight after Sims ignored repeated requests to participate.

Knight took advantage of the time to tell Greg Dunker about programs implemented to combat recidivism. Knight expressed gratitude to McCracken County for the reception to the plans.

“I couldn't believe the amount of support from the community that jumped on with this and we saw a need within, particularly, the river industry for employees, and so we partnered with them and they have been very supportive and we started with the welding program and it grew very quickly.”

Through those partnerships with the river industry, WKCTC, and the Kentucky Labor Cabinet, Knight and his staff have started 4 trade classes to help inmates find gainful employment on release, and hopefully, turn a life around.

Knight touted his team, and how they have been able to save the taxpayers around $1.5 million, to this point, through renegotiating contracts and being careful with expenditures. Knight noted that, like other businesses, the jail has jobs available. He said those jobs are not for everyone, that it takes a special person to serve.

Knight said he feels that calling.

“Yeah, I guess it takes a special breed of people who want to do this--the same, you know, with law enforcement or military and, you know, I've done all of those things and I don't know. It's a draw of public service, and if you got that in your heart, that's just... you do what you do.”