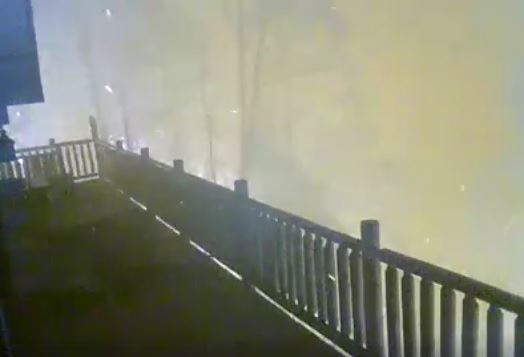 Chris Allen lives in Todd County but owns two properties about a mile apart on Raccoon Ridge Road. He told WKDZ radio their ordeal began between 8:00 and 8:15 pm, when their security company called.

"ADT called and said there was a fire. They were sending the fire department, so I have security cameras that I can view online. We sat here, pretty much helpless, watching," Allen said.

Around 12:30 Tuesday morning, Allen said the alarm company called again, saying their second cabin, Bella Vista, had an active fire alarm. He said by then dispatch had stopped sending firefighters to homes due to safety concerns. Allen said they weren't able to log in to the cameras in that home because power was already out.

In spite of lots of personal memories, Allen said they still have their home in Kentucky, so they are fine. However, he knows two neighbors in Gatlinburg who are permanent residents. Those folks lost their homes, and one didn't have insurance. The other couple barely escaped, and had to flee their home so quickly they couldn't save their cat.

Allen said his family spent Halloween at one of the cabins, and it will be a sad experience when they are allowed to go check on their property.

Allen said, "We've got to figure out what we're gonna do. Whenever we are allowed to get in up there, we're gonna cry over our ashes and pray for the ones that lost their homes, and after we leave, we're done feeling sorry for ourselves because we could be a lot worse off."

To see and hear more on this story, including video from Allen's home, click the link below to visit website for WKDZ in Cadiz.